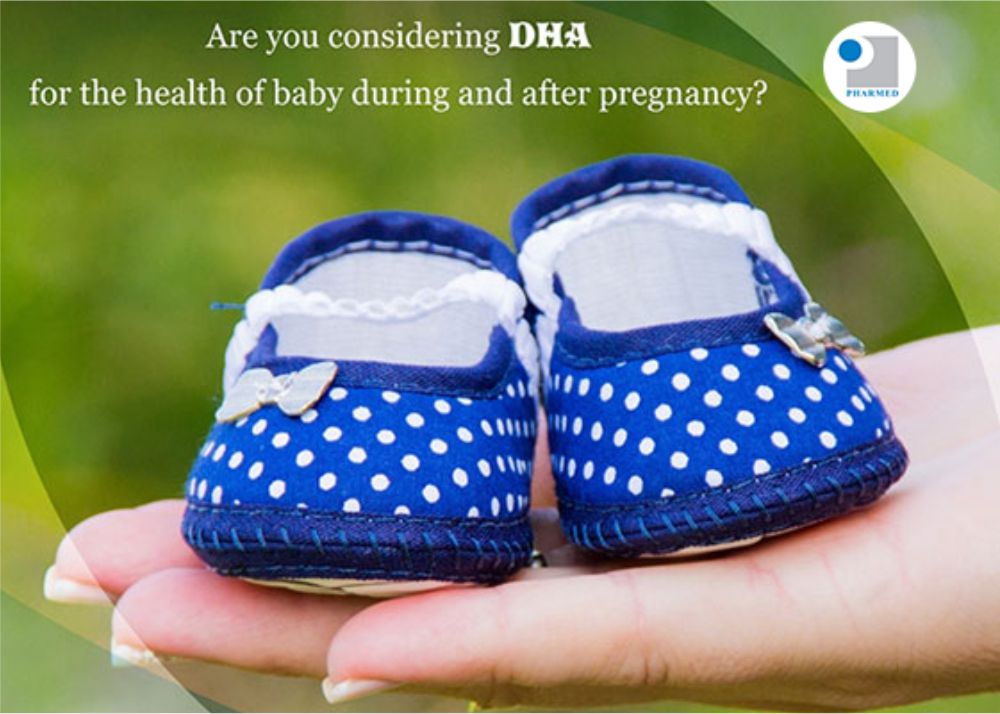 DHA requirement starts even from before pregnancy.

Since the brain and other important organs start developing early on, it is required even in early pregnancy and as the baby grows; its requirement is maximized during late pregnancy.

DHA is important for babies’ brain and retina development during the third trimester and up to 18 months of life.

Since the newborn is also developing, and after birth the brain, eyes, coordination of different movements occur, DHA is essential for the growth of the newborn.

After birth, the only source of food for the baby is breast milk and the chances of the baby getting additional DHA is only through that. It is, therefore, very important that the mother takes adequate DHA during the period of breastfeeding for adequate supply to the baby.

Pregnant women are likely to have an increased need for essential omega-3 fatty acids compared with women who are not pregnant.

Docosahexaenoic Acid (DHA) is an essential omega acid and can only be obtained from the diet. However, to provide for extra DHA in a specific manner, supplemental DHAs are available and they are becoming routine in many countries, including India.

Why Is DHA Important?

DHA (Docosahexaenoic Acid) is an Omega 3 fatty acid found in the meat of cold-water fish. It is present in the body and even in every cell leading to the fact that it is crucial for many significant bodily functions.

It is present in large amounts in brain and eye, and it has been proven that without DHA, these organs do not develop to their fullest potentials and even do not function well, even in the future life. The irony is that although this is a substance of utmost importance, our bodies cannot make it on its own. It must be taken or given from the outside to fulfill the need, particularly when there is more need, such as, during pregnancy and lactation. It is also now said that it has a lifelong need, and preparing the body for pregnancy from the start of womanhood, also calls for higher needs. The highest concentration of DHA in a human body is in the retina, which means DHA plays a critical role in fetal and newborn baby’s eye tissues, nerve and brain development. It is now well known that during the last three months of pregnancy, the demand of DHA in mother’s body rises manifolds since the developing baby may utilize about 50-70 mg a day of DHA for rapid growth. However, supply for such higher needs can only be ensured through the mother's DHA intake. Like any other important substance that we get from nature for our bodily functions, DHA is also used from pre-existing stores. If the mother's body stores of DHA are less, the high utilization of DHA for babies' brain development during pregnancy up until about 18 months of age following birth is affected badly. That is why experts now say that it is important to build mother’s body reserve of DHA from early on so sufficient DHA can ensure healthy development of the brain and visual functions in the baby.

Getting enough DHA during pregnancy can successfully pass on its many benefits to the baby. There is documented evidence that this one single step may improve, attention, focus and learning in babies. Whereas, lower brain DHA levels may be associated with limited ability to learn, function and increased indicators of anxiety, aggression, and depression in growing babies. As DHA plays a very integral part in brain development of babies, mothers should consider adding DHA supplementation to daily diets.

Why You Need DHA?

Most of the pregnant women in India are not likely to get enough DHA from food, as a major source of DHA like seafood is not part of the everyday diet in India. In such cases, DHA from outside becomes very essential. Supplementation with DHA during pregnancy can avoid the premature birth of babies and also reduce the chances of premature birth complications like low birth weight, weak immunity, repeated infections, etc.

DHA supplementation during breastfeeding has been shown to result in mental development advantages in children, including improved attention skills, IQ, learning ability, etc. DHA supplementation is essential for mother’s well-being as well. Studies show that women with lower omega-3 fatty acids levels are at greater risk of depression during pregnancy.

When to Start DHA Intake?

Some of the studies have shown that folic acid, vitamin B12, and DHA are interlinked to prevent adverse pregnancy outcomes. Therefore, starting DHA intake before pregnancy will ensure healthy conception and pregnancy. In fact, it has been recommended by none other than WHO (World Health Organization) that all women of childbearing age must have an adequate DHA intake; if not available from food, better through supplementary preparations. The placenta, which is the connection between the mother and the developing baby in the womb, starts delivering DHA from early pregnancy and is maximized during late pregnancy. It has been shown that DHA influences the early pregnancy supply connection process between the mother and the baby by stimulating tube formation during the first 3 months of pregnancy. The baby’s brain starts developing from the 4th week of pregnancy but brain growth speeds up at a faster rate during the second half of pregnancy, and the rate of growth remains high during the first year of life with continued growth for the next several years. Most of the brain growth in children is completed by 5–6 years of age.

In babies at birth, brain weight is 70% of an adult out of which 15% of brain growth occurs during the first 12 months of life and remaining brain growth is completed during preschool years. Similarly, the development of eye (retinal nerves) is rapid in the final months of pregnancy followed by the first six months of infancy.

For these reasons, DHA requirements increase during breastfeeding, due to increased protein and energy needs for breast milk production. During this period, the mother’s body loses more than 70–80 mg DHA/day in breast milk. So, the amount that would be required is more than this since there is an additional need to fulfil the mother’s own body needs.

Babies of mothers supplemented with DHA had higher mental processing scores, psychomotor development, and eye–hand coordination. These all indicate that it is beneficial to start DHA supplementation before conceiving and continuing throughout pregnancy and lactation to have a healthy outcome. Before, starting supplementation, it is advisable to discuss this with the doctor.

To optimize pregnancy outcomes and fetal health, consensus guidelines have recommended that pregnant women consume at least 200 mg of DHA per day.

There is a common misconception that foods like walnuts and flaxseed oil are dietary sources of DHA. However, these foods are sources of another omega-3 fatty acid, alpha-linolenic acid, or ALA, a precursor of DHA. It is often said that ALA will produce DHA in the body. However, in normal and healthy conditions, the ALA to DHA conversion in the body is inefficient. This means from a large amount of ALA, only a small amount of DHA can be produced in the body. Compared to DHA, ALA has no known independent benefits on the brain or eye development and functions (as DHA does).

Fish is a fantastic source of DHA, but pregnant and breastfeeding women need to exercise cautiously. It is desirable to eat enough oily, fatty fish to obtain the DHA benefits. However, these may have too much dangerous mercury in the diet and so to the baby’s diet, specifically, when they are derived from deep-sea fishes.

Consult your doctor before starting any type of supplementation.